The first activity of the Golden Rice South Asian Tour was an all-day visit to the International Rice Research Institute outside Manila, Philippines.

We were toured around the large grounds where many field trials for numerous rice trials are underway. Most impressive was the long-term continuous cropping program. For 52 years plots of rice under various regimes of fertilizer including no fertilizer, have been producing three crops per year and there has been no loss of productivity and a net uptake of carbon in the soil. 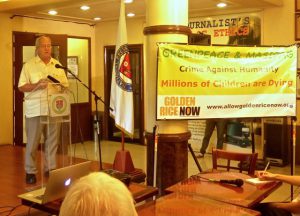 We were able to reach a lot on media in Manila with fantastic assistance from Carol Claudio at the National Press Club of the Philippines.

We held our first conference on Friday March 6 at the National Press Club in downtown Manila and a second one at the weekly Saturday morning press meeting in Quezon City on March 7.

The most prominent local anti-Golden Rice organization MASIPAG, the group that destroyed the Golden Rice Field trials in 2013, held a rally at the Ministry of Agriculture the same day. 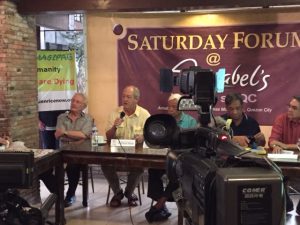 Most other news is overshadowed by the crisis in the southern island of Mindanao where Muslim extremists are threatening civil war so we were fortunate to get the attention we did. Voice of America covered the event with a somewhat lukewarm article, but at least we were at the top of the story. 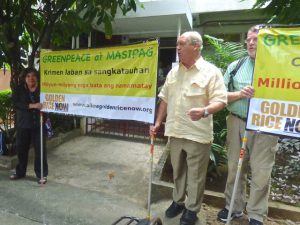 After the media conference at the National Press Club, we travelled to Quezon City, the largest and most well-to-do district in Manila, to demonstrate at the Greenpeace office.

The office building where Greenpeace South East Asia is housed has no indication of their presence there. They don’t want “walk-ins” like we did in the early days of Greenpeace when it was all about public outreach. Today they tend to be cloistered in their well-oiled fundraising machine, bringing in millions with their opposition to GMOs.

Greenpeace refers to Golden Rice as “a Trojan Horse for GMOs”, indicating they know full well that Golden Rice will cure vitamin A deficiency if it is ever approved for agricultural production. I tell our audiences “We are getting in the Horse, because we know who won that battle. It was the guys in the Horse!” 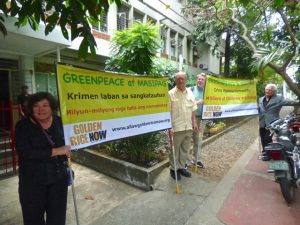 No one from Greenpeace showed their face while we chanted: